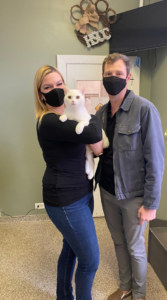 Snowball’s new parents hadn’t had a cat on their own before, but they knew it was time now that they’re settled and prepared for the responsibility of a kitty. When they met Snowball, he instantly put on the charm, curling up in his (soon to be) mom’s lap and accepting all the pets. He was playful, curious, and so sweet with them! They visited some other cats that afternoon, but they couldn’t stop thinking about Snowball and his quirky personality. They knew he would be the purrfect addition to their family, so they applied to adopt him! 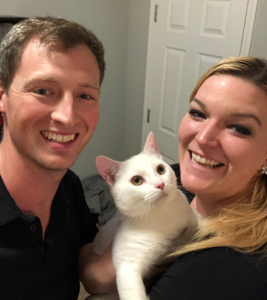 Shortly after Adoption Day, Snowball’s new parents gave us a quick update about how he’s adapting to his new home. Now known as Oliver, this sweet boy is adjusting well and settling in. His parents report that he’s a talker, and he loves to go in the other room and talk away until they respond! They also included a couple of photos of Oliver enjoying his new life. 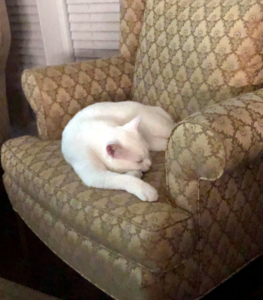