In May 2018, Gus (formerly known as Gabriel) was adopted from us. Recently, his adopter visited the HSCC again, wanting to adopt a companion for Gus; she chose Capone. The two cats had lived together for a time in one of our shelter’s free-roam cat rooms, and HSCC employees and volunteers have been so eager to hear how they would adapt to each other now that they share a forever home. We have received a happy update informing us that these two boys are doing just fine together! From their adopter: 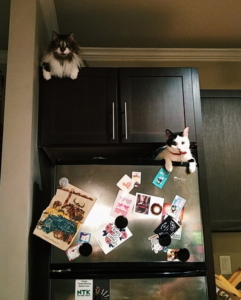 I just wanted to send a quick update on Gus and Capone. While it took them a week or two to get used to each other, they enjoy living together now. They still have their occasional arguments (but 99% of the time it’s just them rough housing) but they have settled into a routine and are overall very happy.

I attached a couple pictures of them and their antics. Gus wasn’t a climber before, but Capone quickly showed him the ropes (as you’ll see in the picture with them above my fridge). And while they don’t mind heights, they’re still skeptical of the vacuum cleaner (which is a little obvious as they take refuge in the stack of cardboard boxes).

We are thrilled to hear that these two are doing so well together in their shared forever home.