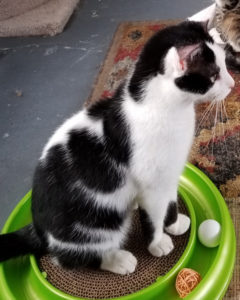 Capone is an eccentric little guy with an independent nature and a flair for the dramatic. He is adept at entertaining himself, and his solo antics were a delight for HSCC staff and volunteers. Capone likes his own space, and respects the space of others, so he’s always been able to peacefully coexist with a variety of other feline personality types.

In 2018, a special boy named Gabriel (now Gus) was adopted from the HSCC. This majestic boy is an affable cat with abundant confidence, and he had ruled the roost in a free-roam cat room here. When his person decided that she and Gus were both ready to bring another cat into their home, she returned to the HSCC. Her intent wasn’t to adopt an animal that day, but to begin a decision-making process that would entail much time and thought, ensuring the best possible fit for everyone. After spending time in our cat rooms, she left our facility with a short list of cats to consider. After further deliberation at home, she decided that Capone was the one! 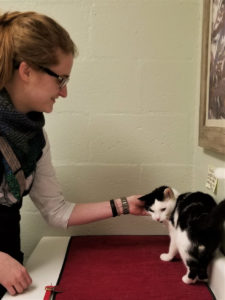 This is exactly the sort of process we encourage when choosing a companion animal, and we are thrilled that Capone has found a forever home where such thought has been put into the needs and well-being of everyone in the household. Happy tails, sweet boy!

Click here to read an update about how Capone is doing in his forever home!