We received this amazing update from Hansel’s family letting us know how he is doing (click here to read Hansel’s original adoption story). Now known as Shere Khan, this special cat is LOVING his new life. We are so happy for him and his family! 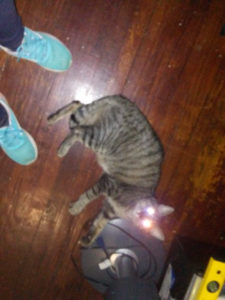 This is his usual tactic: flop down in front of the door to block us from opening it. “How could you leave such a cute kitty? Don’t you want to rub my belly?”

We’re doing great… I swear he is the happiest cat I’ve ever seen.

That very night we brought him home a different aspect of his personality came out, he was desperate for petting and being held. He kneads everything he can get his paws on, including my face, lol. One of his favorite things when one of us gets home is being scooped up and held while we rub his chin. My friend described him as “one big LuvBug.” I never expected him to be so affectionate!

He’s still very much the Guard though, he listens at the door for unusual sounds in the hall. In fact, he has no interest right now in the door other than keeping us from leaving.

He’s very protective, and when someone isn’t feeling good he becomes Comfort Kitty. He will usually lay halfway on them, and squinch his eyes shut. Or in my case he puts his head against me and occasionally checks my face/expression.

He’s insanely communicative, I noticed while he was still at the Cafe, but it’s even more apparent now. He studies our expressions to try and formulate his communications. He responds using various amounts of vocals, enunciation (he enunciates more when he thinks he’s not getting through to me or I’m not responsive), and paw gestures. It’s honestly like having a furry toddler in the house, only more sensible. One night after a bout of yelling at me for leaving him (I had errands) he meowed loud enough that I turned around to face him. He shot out a quick “bark” of a meow and cocked his head at me pointedly. My friends think this is hilarious because that’s *my* body language and generally how I communicate. LOL 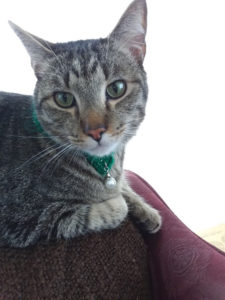 He frequently chirps and twitters at me in play or just in general when he’s happy. Occasionally he’s done what sounds like an attempt at a yodel — 2 meows strung together. We’ll see if he continues trying to imitate our speech. I know my parents’ Greyhounds would do that.

He loves his Daddy too. He purrs and kneads [his] chest during his pets, and he tells me he’s slept on his chest, but usually between his legs is “the” spot. The “no cats on the bed” rule obviously didn’t last long — I came in to [the two of them] curled up together the 4th day he was here.

He’s been super easy to switch over food-wise, and got used to a primarily wet diet very quickly. I haven’t had a single issue with his digestion or litterbox use, in fact he’s very clean. I keep thinking how incredibly lucky we are.