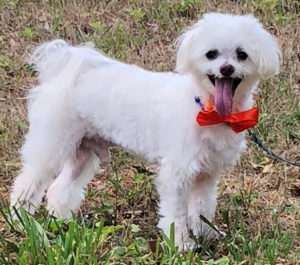 When Aspen first came to the HSCC, he was underweight, malnourished, and suffering from a skin condition. It was also clear that his teeth were in need of immediate attention. Despite his various ailments, Aspen was still a happy little guy with a sunny personality who basked in human attention. He enthusiastically accepted a medicated bath and a soft, warm bed. 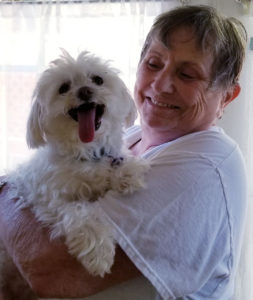 After his initial wellness assessment, we scheduled a dental for him, where the extent of his oral problems was revealed. Most of his teeth were so rotted that they fell out or broke off at the touch. After a proper extraction of most of his teeth, Aspen developed a new lovable and endearing trait, where his little tongue flopped out the side of his mouth.

After putting on some weight and getting back to good health, Aspen met his very own doting human who fell in love with this quirky, spunky little man at first sight. The rest is history, and he has claimed the house as his own. Happy tails, Aspen!